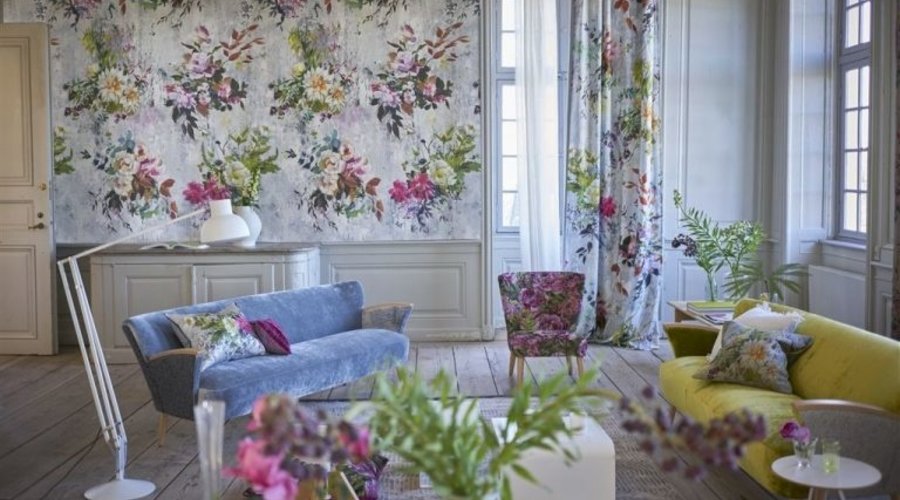 The Earth Laughs in Flowers

Ralph Waldo Emerson once wrote that the ‘earth laughs in flowers,’ and in my opinion so does British designer Tricia Guild, founder of Designer’s Guild. Designer’s Guild is a London based firm known for their amazing color stories and bold, oversized, painterly compositions. Each design starts as a large work on canvas before becoming digital prints on fabric. Tricia draws inspiration from nature and has a decidedly European palette. Scratch that, she has a decidedly Tricia Guild palette, which has become synonymous with the best of British design.

Tricia Guild’s mix of daring and restraint is inspirational.

Originally an interior designer, Tricia Guild founded her textile business in 1970 when she couldn’t find the fabric that she wanted. Her business has grown exponentially, as she has shaped the modern British look. She is now sold in 60 countries around the world and employs several hundred people. Guild believes in pretty decorating, and color and mixing textures—all tenets I feel deeply about as a designer. Her mix of daring and restraint is inspirational. If I had to name one person in the industry right now that I had a design crush on, it would have to be her. I mean who wouldn’t have a crush on the only person ever invited into the British Royal Collections to dabble and take inspiration? Her Royal Collection comes from unique access to the Palaces where she has taken motifs from architectural details of the Queen’s bedroom fireplace, and centuries old fabric remnants stored in the royal basements. I kind of want to be her!

I am completely excited to announce that we are now Designer’s Guild’s only Philadelphia retail store. 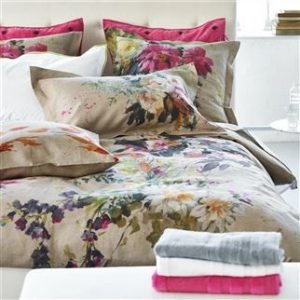 We have Aubriet (exquisite clusters of summer roses digitally printed onto softened pure linen) in the window right now, and a bunch of her pillows displayed throughout the store. Designer’s Guild bedding is such a great value, as well. It is all 400 thread count long staple cotton in such a delicious mix of colors, with thoughtful details (her white bedding has a charming double flange), that delight the senses.

I adore her linens. She is an inspiration: linen doesn’t have to mean hemp. 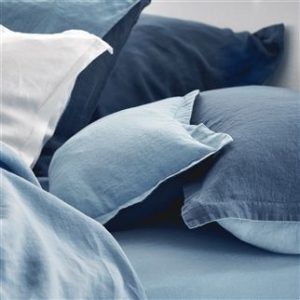 Lovers of linen bedding are a small but devoted sub culture. They understand that while other percale and sateen sheeting may last at most five or six years, linen is a long term investment. It only gets softer and finer with use. And don’t ask me how, but it keeps one cooler in the summer and warmer in the winter. It is a great regulator of temperature, something to do with the thickness of the flax fibers. And the best part: it is not meant to be ironed (although you can). Part of the charm is the unironed relaxed chic it creates.

While percale and sateen sheeting may last at most five or six years, linen is a long term investment. It only gets softer and finer with use.

Next time you’re walking down Germantown Avenue, stop and take a peek at the new Designer’s Guild display in our window. Or pop upstairs and get a closer look at all of the fabric, bedding, wallpaper and more they have to offer. I just know you’re going to love Tricia Guild’s sense of color, texture, and beauty as much as I do.